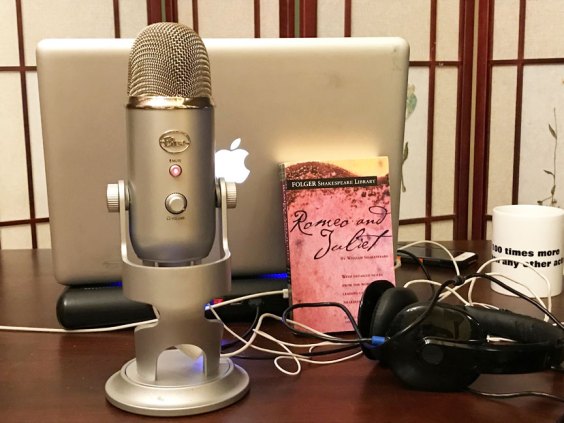 Welcome to acting class! Thank you all for enrolling and for submitting video auditions for Playful People Productions, R&J: The Radio Play. I have communicated with most of you one-on-one and I hope you all know how I feel about your wonderful video submissions. Self-taping-auditions is now a reality in our industry and the more information and practice we get, the better it will be for all of us to land the role of our dreams when the theatres open up again. And they will reopen. And it’s my hope that this class will get you ready. I am looking forward to having you all in class during this brave and exciting new way of learning more about the art of storytelling and creating theatre in these very challenging times. Don’t lose hope.

Here’s what you need to know before you download the cast list, script, and scene breakdown, SO PLEASE READ THE ENTIRE EMAIL BEFORE DOWNLOADING THE ATTACHED MATERIALS:

RADIO PLAY
An external microphone is not required but highly recommended. An external microphone can be something as simple as the built-in microphone in your earbuds, or as high tech as a yeti microphone. Doing a radio play is great training if you ever want to do film, television, and voiceover work. With four casts, we will do four separate radio productions. The same Foley work (sound effects) and music will appear in all four productions. In the post production, after we’ve recorded your parts and start the editing process, we will plug in the effects under the dialogue. It will be good practice (and fun) to do some of our own Foley work during rehearsal. Think of this as doing the voice acting work on an animated feature film. Sometimes standing up, walking in place, and even running in place may be required, or moving your body to accentuate the action of a fight scene, etc. Also, when your character(s) are addressing the audience in an aside, this will be treated as a “voice closeup”, when you will be asked to speak directly into the microphone. There are many other valuable tools-of-the-trade that you will learn in this class.

SCRIPT
Today you are receiving the first draft of our script which I have adapted for our radio play production. You will probably get frequent updates to the draft throughout the class schedule and rehearsal process, however, the dialogue will not change. The digital script is available to download here and I recommend you print it and put it in a binder with all of the other materials that I will send you throughout the course of this workshop. You will need to make notes in your script. In the script I have marked all of the Foley and music spots. Please read all of the FOLEY markings, the Foley markings are also your stage direction. Also, read the summaries I have provided at the beginning of each scene and at the end of each scene, we will discuss these summaries throughout the workshop. Read the entire script, not just your part(s). I’ve updated the script to present day and valuable information is reflected in the stage direction.

SCENE BREAKDOWN
Also note that each scene is broken down into sections, and each section is listed within the scene. Each section also lists who is active in that section of the scene. These sections are important for when we begin recording the radio play during the final two weeks of the rehearsal/class schedule. You can view the scene breakdown here.

CASTING
Casting is up, you may access the cast lists here. Any questions regarding R&J: The Radio Play should be sent to Susan at Playful People Productions. No one else will be able to access the information unless they have the link. In other words, it will not be public. Please do not share the Zoom link to class.

ASSIGNMENT for WEDNESDAY, September 16, 2020
For our first class, I would like to give everyone the opportunity to tell us who they are and what they’re doing in R&J: The Radio Play. I want you to “bring” an object that you can hold in your hands. This item should be something that you either cherish or scorn, and tell us why. It could be: a pet; a childhood toy; a doll; a stuffed animal; a trophy or award; a handwritten letter from a long lost love; a post card; a knickknack that you think is ugly but can’t seem to get rid of because you have an emotional attachment to it; etc. I want you to tell us a one to two minute story about the object.

Thank you everyone, see you on Zoom, soon!